Getting to know Brother K

On a sunny Tuesday in March, I find myself sitting in an Astoria apartment across from two guys in their 20’s, who are trying to describe a book to me that I have never heard of.

This is the just the beginning of what turns out to be one of the most fun interviews I’ve ever conducted- and the topic is the musical stylings of Brother K.

Brother K, made up primarily of Lucas Kwong and Garrett Fiddler, is a New York based music project that’s been up and running since August of last year (although the musical chemistry started last May, when Garrett jumped in to filming on Lucas’s music video, Payroll. The two musicians met through the church they both were a part of while during their separate terms attending Yale for BAs in english literature. After the filming, and a few experimental open mic performances, both could see working together as a plausible musical future.

So after Garrett spent the summer in Africa, he came to New York to join Lucas, who is working on his doctorate at Columbia University. It was the beginning of some intense music.

“He was like “Yeah, I’d still like to come back to the city and make merry... So make merry we did,” Lucas says.

And so started a tour of the under cover scenes that New York, and other major cities on the west coast are famous for.

If you've never heard Brother K perform, it's hard to classify the sound that they've created in a few words. Somewhere between a passion for poetic lyrics and intense chord progressions, their music aims to create a sense of captivation on both the emotions and the mind, inducing a desire to listen and to act at the same time.

Garrett jumps in and explains what kind of advantage having literary based degrees gives them on expressing themselves through well placed lyrics.

“You’ve seen a lot of different people writing poetry. You’ve studied a lot of it, and you’ve been around it a lot too,” he says.

Of course, a big part of what Brother K projects comes out of it’s band members.

Lucas describes himself as being raised in “a socialist paradise, where he developed an early addiction to playing guitar, and reading books with no pictures.” To the average viewer, he’s a bit of a goofball with a vocabulary that allows him to articulate what he’s thinking at any given moment. But put a guitar in his hand, and he transforms into a new person, trying to change the world with his songs. Raised on the Beatles, who he calls the “Alpha and Omega of rock,” and influenced by Radiohead, Johnny Cash, and Duke Ellington, his creative ideas about music have lead him through his fair share of bands and solo projects. But in all the things he’s been part of, he hasn’t lost sight of what he’d like to see music do.

“My vision is to revisit that moment when rock music had the element of folks concerned with imagery and that kind of thing,” he says.

Which makes Garrett, a fellow jokester (the band he performed with before meeting Lucas was called The Flying Burning Sharks), with a matching amount of passion for music, a good fit. Garrett, who was influenced by Switchfoot, The White Strips, Mumford and Sons, and the early work of both Skillet and Audio Adrenaline, calls himself the one with “a higher tolerance for sappiness.” He’s recently started working on a few pieces to contribute to Brother K’s already developed selection, mostly comprised of songs Lucas wrote before the two started working together, and has been bringing his own spin to that which is already written.

Watching the two of them together, trying to explain why they would name a musical group after a book called the Brother’s Karamazov (although Lucas admits that the K could also stand for Kwong, his last name) is more than enough to illustrate the chemistry that is taking the band big places.

But no group is without it’s issues, and for Brother K, holding a drummer is a big issue. Throughout their time together, they have yet to find a drummer who hangs around for more than a few sets (although they have some great fill-in drummers when they are in a pinch). Though they haven’t found “that special someone” yet to to fill the void, Lucas praises the different guys who have played with them for their talent and dedication to their art.

Even so, Brother K has been stirring up some big discussion with their recent shows. With their collaborative efforts, they are starting to see great results and reviews from the people who listen to their work. They’ve played enough shows to start earning requests for favorites from the audience. And they’ve started to develop their own favorites as well.
Garrett’s eyes light up as he says that his favorite is “Only Child”, a heavy song with chilling vocals about the love of God. He talks about some of the fun things he gets to do in the song, including using a piece of equipment called a whammy pedal. “It’s our closing number for performances, and it’s got this great range of dynamics, where it’s got a feel of suppressed strength in the first two verses and chorus’s, and then it really opens up and just comes out big, and hits hard towards the bridge and the ending.”

“It’s the climax of our show,” Lucas adds.

And despite the christian overtones of “Only Child” and some of the other songs that Brother K is known for, such as “Hem of Your Robe”, which is a crowd favorite (and my personal one as well), both Lucas and Garrett take their music to be universal, not written for any one people group, but instead written from the emotions and insights that occur in a persons life.  Lucas explains that while he wouldn’t classify his music by other things that are part of him, they have an influence on what he writes, because they are part of who he is.

Brother K embodies the kind of things new bands dream of- both on a musical rarity that combines passion and melody, and on the stories told by two New York musicians, invested in making music hat reaches out to the masses. Music is not rare in New York City, but a love for the stage like the one Lucas and Garrett portray is, and it sets them apart.

I finish the interview by asking the guys what inspires them to keep writing and performing. Garrett tells me that when everything is stripped back and it’s just lyrics, he gets caught up in the moment and the music.

For Lucas, it’s when the audience is engaged.

“When that happens,” he says, “well that’s inspiring, because you know... something is happening.”

Find out more about Brother K at their website brotherk.bandcamp.com. Or see them live on April 28th at Sidewalk Cafe in NYC. 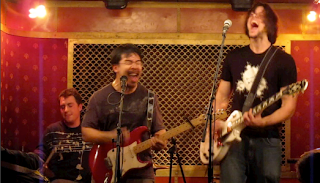 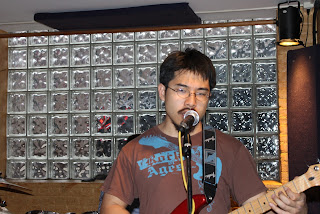 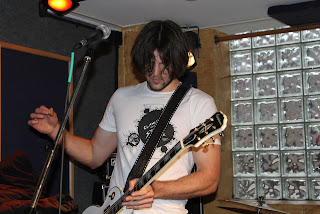 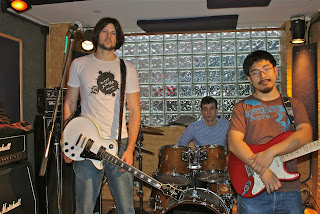