Look at the birds of the air: they neither sow nor reap nor gather into barns, and yet your heavenly Father feeds them. Are you not of more value than they?
Matthew 6:26
This morning, on my way home from New York, I saw a pigeon hanging out in Port Authority. The little guy was hanging out around gate 305, a short line, which would just barely get him out of New York City. My guess is that he was waiting for the bus to Hoboken or Secaucus, where undoubtedly he would transfer and try to get somewhere more exotic. I didn't have the heart to inform the little guy that the driver was not gonna let him on the bus- I mean, they aren't really thrilled with taking on people. But he seemed smart, so I figured that if he really wanted to, he would make himself a spot at the top of the bus, or squeeze into the luggage spot underneath.
I watched him strut his way around the station, head bobbing in a gentle movement as he walked along the halls that were slowly filling with morning passengers. Some walked right past him without a second glance, while others steered far away, making sure to clear him. He paid them no mind. This was a bird with a mission.
And then these two girls, waiting for their own bus at 304, decided that they should share their breakfast. I mean, he did look a little thin. And he was going on a journey, so they knew he would need sustenance. They started ripping little pieces of their bagel and throwing them to him, and he chased around the bread with glee, pecking it off the floor. They threw more then he could eat, and overwhelmed with his good fortune, he spun in a circle happily, before letting out a soft coo.
Just then my bus arrived, so I hopped on board, leaving my little buddy sitting in the hallway with his new friends, happily having breakfast. But I thought about him as my bus pulled out with a small twinge of jealousy. I mean, I had a life planned. I had somewhere that I needed to be. I had to buy my own breakfast. And here was this pigeon, who, sick of city life, just took off and went to find a new life.
I guess that in the short time that a bird lives, he does more than we as people can ever hope to accomplish. They don't play by the rules. They don't live on standards. They don't worry about breakfast. They just live.
For the first time in my life, I wish I was a pigeon. 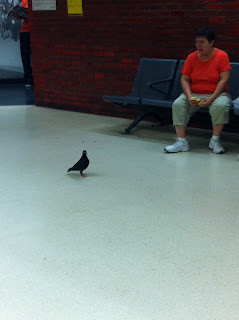 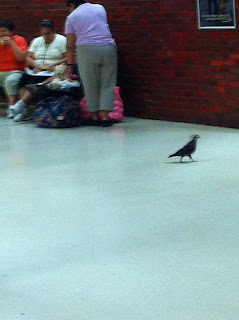